Skip to content
Join 50K on these platforms:
TwitterYoutubeInstagram

Leaders and Members of A Unique Movement

The 50K Coalition is a unique collaborative of more than 40 organizations focused on a bold national goal: to produce 50,000 diverse engineering graduates annually by 2025. The coalition was formed by the American Indian Science and Engineering Society (AISES), the National Society of Black Engineers (NSBE), the Society of Hispanic Professional Engineers (SHPE) and the Society of Women Engineers (SWE), the nation’s preeminent diversity engineering organizations, which collectively serve more than 85,000 pre-collegiate, collegiate and professional members. The expertise and more than 188 years of collective experience of the coalition’s founding organizations perfectly position them to tackle the coalition’s goal. 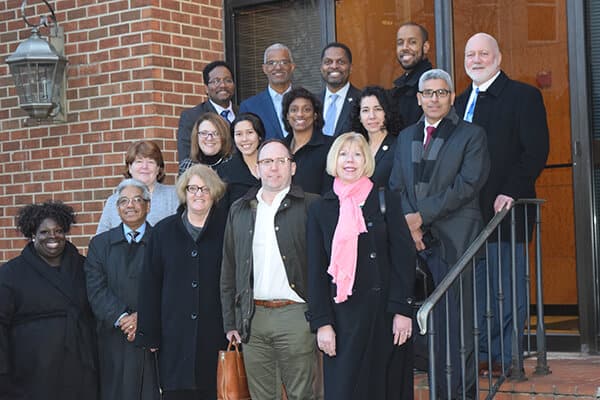 Alysia N. Green is the General Manager of Information Technology for Midstream, Development and Global Corporate Functions, a position she has held since June 2014. She is responsible for leading Chevron's Midstream and Development IT function to identify and deliver the next generation of technology to improve performance and grow Supply & Trading, Chevron Shipping Company, Chevron Pipe Line Company, and Chevron Power and Energy Management. She also leads Global Corporate Functions IT team to deliver and support standard and integrated IT solutions with trusted data to: All Corporate Departments, select Technology, Services, and Projects Companies; Top Corporate Executives; Chevron's Board of Directors.

Previously Alysia was General Manager of Information Technology for Chevron's Asia South Business Unit where she was responsible for developing and managing the strategic direction of IT for Thailand, Bangladesh, China, Vietnam, Cambodia and Myanmar. During her tenure with Chevron, Alysia has worked in the Downstream business in a variety of IT and business roles, in the central IT company in leadership positions, in the Midstream business as the IT Strategy manager and in the Upstream business as Information Technology and Business Development & Planning Manager. Alysia was a part of the initial leadership team of Chevron's Black Employee Network and currently serves as advisory board member for Chevron's XYZ and women's network. She serves as the Chevron Management sponsor for IT recruiting for SWE, HENAAC, SHPE and NSBE. She also sits on the advisory board of the Lawrence Hall Of Science. Alysia joined Chevron in 1991 as a programmer analyst. She earned her bachelor's degree in Mathematical and Computational Sciences from Stanford University, California that same year.

Christopher Smith currently serves as the Vice President of Scholarships, University Relations, and Research at the National Action Council for Minorities in Engineering, Inc. (NACME). He is responsible for the management and direction of all NACME scholarship programs and scholarship management services. Christopher oversees the NACME Scholars Program, where NACME partners with more than 50 colleges and universities across the country to support over 1,300 underrepresented minority engineering students annually. He also oversees the administration of the Alfred P. Sloan Minority Ph.D. Program and the Sloan Indigenous Graduate Partnership. Both programs are focused on increasing the number of underrepresented minority students who earn STEM graduate degrees in the United States.

Previously, he served as NACME's Director of Research and Program Evaluation, where he reported on trends in engineering education and policy, and measured the impact of NACME programs. Prior to joining NACME, he worked as the Program Director of Evaluation Services at The After-School Corporation (TASC), where he evaluated after-school programs across New York City. In 2015, he received his doctorate from Fordham University in Applied Developmental Psychology.

Fraser joined Northrop Grumman through its TRW acquisition in 2002. He started his career as a summer engineering hire in 1979, returned after graduation as a space propulsion engineer and served in a number of increasingly responsible positions in engineering, strategy, business development, communications and government relations over his career.

Fraser earned a bachelor's degree in chemical engineering from the Massachusetts Institute of Technology and a master's degree in business administration from the University of California, Los Angeles. He also served as a Brookings Congressional Fellow.

Fraser is a member of the Executive Leadership Council and serves on the board of advisors for Evans & Chambers Technology, an information technology company serving the national defense and intelligence communities. He is a former regional co-chairperson of the MIT Educational Council, which is responsible for coordinating interviews with MIT alumni for all freshman applicants to MIT from the Washington, D.C. metropolitan area, and is a recipient of the MIT George B. Morgan '20 alumni award for excellence in support of the Educational Council.

Darryll J. Pines has served as Dean and Nariman Farvardin Professor of Aerospace Engineering at the Clark School since January 2009. He first arrived at the Clark School in 1995 as an assistant professor and then served as Chair of the Department of Aerospace Engineering from 2006 to 2009. As Dean, Pines has led the development of the Clark School's current strategic plan and achieved notable successes in key areas, such as improving teaching in fundamental undergraduate courses and raising student retention; achieving success in national and international student competitions; placing new emphasis on sustainability engineering and service learning; promoting STEM education among high school students; increasing the impact of research programs; and expanding philanthropic contributions to the school. Today, the school's one-year undergraduate retention rate and six-year graduation rate is 87.6 percent and 74.2 percent respectively; the university's Solar Decathlon team placed first worldwide in a recent competition against other leading universities; the University's Engineers Without Borders chapter is considered one of the nation's best; and the Engineering Sustainability Workshop launched by Pines has become a key campus event. At a national level Pines has testified before Congress on STEM education and has led an effort as part of the American Society for Engineering Education-ASEE Deans Council's K - 12 STEM Committee to develop a potential College Board AP Exam in Engineering. He is the current Secretary on the Executive Committee of the National GEM Consortium, a national non-profit providing programming and full fellowships to support increasing untapped domestic human capital at the graduate level in STEM fields. Pines' current research focuses on structural dynamics, including structural health monitoring and prognosis, smart sensors, and adaptive, morphing, and biologically-inspired structures, as well as the guidance, navigation, and control of uninhabited aerospace vehicles. He is a fellow of the Institute of Physics, the American Society of Mechanical Engineers, and the American Institute of Aeronautics and Astronautics, and has received an NSF CAREER Award. Pines received a B.S. in mechanical engineering from the University of California, Berkeley. He earned M.S. and Ph.D. degrees in mechanical engineering from the Massachusetts Institute of Technology.

Juan Salgado has been an influential voice in local and national settings for his work on the educational, political, and economic advancement of the Latina/o community. Juan has been the President and CEO of Instituto del Progreso Latino (Instituto) since 2001. Juan led Instituto through a period of national award winning recognition and historic organizational growth establishing national best-practice educational and workforce models. In 2011 the White House recognized Juan as one of 13 people nationally serving as Champions of Change for social innovation in their communities. Most recently, Juan was selected to join the prestigious MacArthur Fellows class of 2015 recognizing his strong community leadership and his innovative approach to education in the Latino immigrant community.

Michael K. Conn, Ph.D. has dedicated his career to work that benefits youth through research. He has extensive experience in creative research and survey design, program evaluation, outcomes measurement, and leadership for non-profit organizations. Prior to joining ERCA, he was Vice President, Research, at Girl Scouts of the USA in New York City and was an independent Research Consultant. In 2000, he founded and led the Girl Scout Research Institute, which has made a significant impact on the organization's program development, advocacy and public awareness. Dr. Conn served on the research staff at Columbia University, and also has taught at Rutgers University. He was Co-Chair of the National Collaboration for Youth Research Group (2008-2013) promoting partnerships and information sharing among more than 50 national youth development organizations serving millions of young people, and is currently co-leading the Positive Youth Development Research & Evaluation group on LinkedIn (2014 - present). He is also on the Advisory Board of the Journal of Youth Development (2010-2013; 2014 -2016 terms), and serves on the America's Promise Research Council. Dr. Conn earned his Ph.D. in Psychology from the City University of New York Graduate School and University Center; he also holds MPhil and MA degrees in Psychology from CUNY, and an MS in Applied Behavioral Science/Psychology from Virginia Tech. He earned his BA in Psychology and Sociology at SUNY Stony Brook.

The 50k Coalition is Comprised of:

The 50K Coalition is brought to you by the generous support of:

Spread the news on social media!